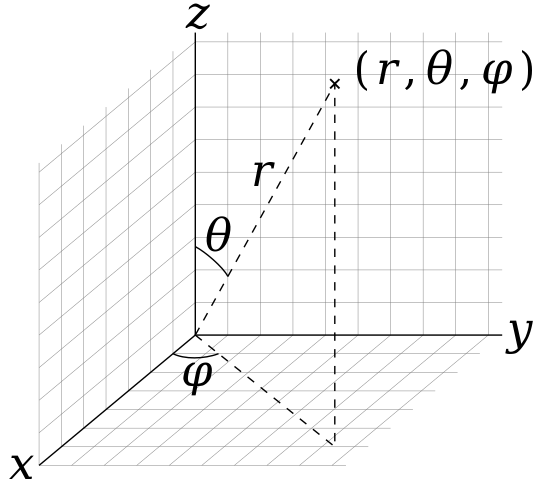 Coordinates are sets of values that describe the position of any given point in space. For a three-dimensional space, you need exactly three coordinates to uniquely define a point.

The Cartesian system, also known as the rectangular coordinate system, is constructed by drawing three lines in space. They all cross a common point, called the origin, and are perpendicular to one another. These lines are called the axes of the system. Each pair of axes defines a plane: these are called the XY, XZ and YZ planes. The coordinates of any arbitrary point are defined as the distance between that point and the planes.

Each arbitrary point in space has three spherical coordinates. The first one, called radial distance or radius (r), is simply the three-dimensional distance between the origin and this point. The second one - the polar angle (θ) - is the angle from the zenith direction to the line that connects the point with the origin. The third one is called the azimuth angle (φ). When you create a reference plane that passes through the origin and is orthogonal to the zenith, then φ is the angle between the point's orthogonal projection to the plane and a fixed reference direction on that plane.

You should use the following formulas for the conversion:

Use the inverse modulo calculator whenever you need to determine the multiplicative or additive modular inverses.
Inverse Modulo Calculator

Law of sines calculator finds the side lengths and angles of a triangle using the law of sines.
Law of Sines Calculator