Use this arctan calculator to quickly find the inverse tangent. Whether you're looking for a simple answer to the question "what is an arctan?" or are curious about the integral or derivative of arctan, you've come to the right place. Below, you'll also find the arctan graph, as well as a neat table with commonly used values, such as arctan(1) and arctan(0). Alternatively, you can simply type the value of interest into this tool and you'll find the answer in the blink of an eye.

Interested in more advanced trigonometry? Check out our law of sines and law of cosines calculators if you have an triangles to solve.

Arctangent is the inverse of the tangent function. Simply speaking, we use arctan when we want to find an angle for which we know the tangent value.

However, in the strictest sense, because the tangent is a periodic trigonometric function, it doesn't have an inverse function. Still, we can define an inverse function if we restrict the domain to the interval where the function is monotonic. The commonly chosen interval, -π/2 < y < π/2, is called a principal value, and is, at the same time, the range of an inverse tangent function.


Using the tan-1x convention may lead to confusion about the difference between arctangent and cotangent. It turns out that arctan and cot are really separate things:

We hope that now you do not doubt that arctan and cotan are different. To avoid any further misunderstandings, you may want to use the arctan(x) rather than tan-1x notation.

By restricting domain of the principal tangent function, we obtain the inverse tangent that ranges from −π/2 to π/2 radians exclusively. However, the domain of an arctangent function is all real numbers. The graph then looks as follows:

How is this arctan graph created? By reflecting the tan(x) in the (-π/2 π/2) range through the line y = x. You can also look at it as swapping the horizontal and vertical axes: 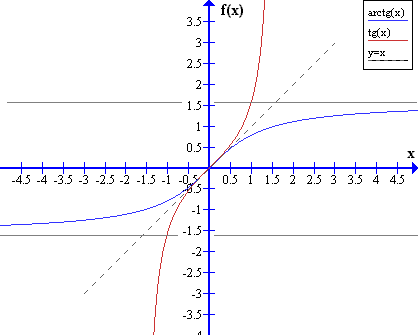 The relationships in trigonometry are crucial to understanding this topic even more thoroughly. Inspecting the right-angled triangle with side lengths 1 and x is a good starting point if you want to find the relationships between arctan and the basic trigonometric functions:

Other useful relationships with arctangent are:

It's easy to prove the first equation from the properties of the right triangle with side lengths 1 and x, as we perfectly know that the sum of angles in a triangle equals 180°. Subtracting the right angle, which is 90°, we're left with two non-right angles, which must sum up to 90°. Thus, we can write the angles as arctan(x) and arctan(1/x).

Arctan calculator - how to use

This is one of our easiest calculators to use, really! Just enter the number which you want to find the arctan of. As the domain of arctan is all real numbers, you don't need to worry too much. Let's say we want to find the arctan 1. Just type in the number and the inverse tangent calculator will display the result. As we expected, the arctan of 1 is equal to 45°. This arctan calculator works the other way round as well, that is as a standard tangent calculator - type the angle into the second box and tangent of that angle will appear.

The polynomial multiplication calculator is here to find the product of two one-variable polynomials of up to degree 6.
Multiplying Polynomials Calculator

Learn about the trigonometric functions with this unit circle calculator.
Unit Circle Calculator