What is the slope intercept form?

Any line on a flat plane can be described mathematically as a relationship between the vertical (y-axis) and horizontal (x-axis) positions of each of the points that contribute to the line. This relation can be written as y = [something with x]. The specific form of [something with x] will determine what kind of line we have. For example, y = x² + x is a parabola, also called a quadratic function. On the other hand, y = mx + b (with m and b representing any real numbers) is the relationship of a straight line.

In this slope intercept calculator, we will focus only on the straight line. You can check our average rate of change calculator to find the relation between the variables of non-linear functions.

Linear equations, or straight-line equations, can be quickly recognized as they have no terms with exponents in them. (For example, you will find an x or a y, but never an x².) Each linear equation describes a straight line, which can be expressed using the slope intercept form equation.

As we have seen before, you can write the equation of any line in the form of y = mx + b. This is the so-called slope intercept form because it gives you two important pieces of information: the slope m and the y-intercept b of the line. You can use these values for linear interpolation later.

The term slope is the incline, or gradient, of a line. It tells us how much y changes for a fixed change in x. If it is positive, the values of y increase when x increases. If it is negative, y decreases with an increasing x. You can read more about it in the description of our slope calculator.

Still need to know how to find the slope intercept form of a linear equation? We will assume you know two points that the straight line goes through. The first one will have coordinates (x₁, y₁) and the second one (x₂, y₂). Your unknowns are the slope m and the y-intercept b.

Firstly, substitute the coordinates of the two points into the slope intercept equation:

Then, subtract the first equation from the second:

Finally, divide both sides of the equation by (x₂ - x₁) to find the slope:

Once you have found the slope, you can substitute it into the first or second equation to find the y-intercept:

How to find the equation of a line?

Find the x-intercept and y-intercept

It is also always possible to find the x-intercept of a line. It is the value of x at which the straight line crosses the x-axis (it means the value of x for which y equals 0). You can calculate it in the following way:

Now, if you look at the y-intercept (x = 0), the point at which you started to keep track of time is t = 0. And so, the value of y at this point will indicate the starting position (distance) of the car with respect to you. This value is, as we have discussed before, the same as the value of b in the slope intercept form of a straight-line equation.

Looking now at the x-intercept (y = 0), this will be the point at which the distance from the car to you will be 0. Then the value of x at this point will be the time when you and the car were at the same place. Let's hope that means you were inside the car and not under.

Other equations with y-intercept

The car example above is a very simple one that should help you understand why the slope intercept form is important and, more specifically, the meaning of the intercepts. In this article, we will mostly talk about straight lines, but the intercept points can be calculated for any kind of curve (if it crosses an axis). 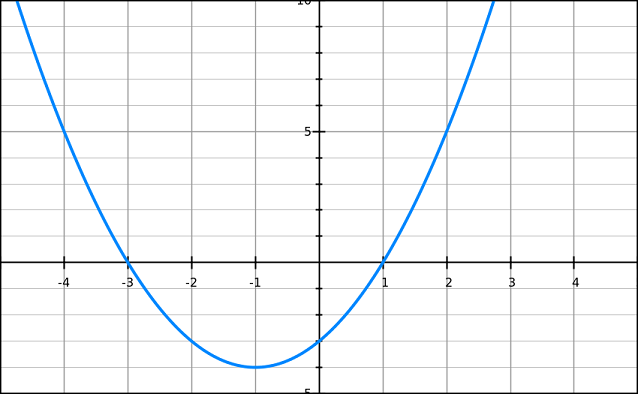 In fact, the example above does not fit a linear equation and still has both intercepts. The same is true for any other parabola or another shape.

One equation that is guaranteed to have a y-intercept but not necessarily an x-intercept is a parabola. This is equation is shown in the image above. It has a maximum or a minimum (depending on the orientation). If this maximum is below the x-axis or the minimum is above the x-axis, there will never be an x-intercept.

However, unlike humans, not all equations are equal. Some of the formulas describe curves that might never intercept the x-axis, the y-axis, or both. Let's see in a bit more detail how this can be.

Equations with no intercept (asymptote)

The second and third groups of equations are a bit more tricky to imagine and to understand them well, we need to introduce the concept of an asymptote. An asymptote is a line (that can be expressed as a linear equation) to which the function or curve we are talking about gets closer and closer but never actually crosses or touches that line.

The definition might not seem totally clear, but if we look at an example equation, we will have fewer problems with understanding it. Let's take the equation y = 1/x. If we try to find the y-intercept by substituting x = 0, we arrive at what is called a mathematically undefined expression since it makes no sense to divide by 0.

If we take values closer and closer to 0 (something like 0.1, then 0.001, 0.000001...), we can see that the value of y increases very rapidly. So around the point x = 0, we know that y would have a massive value, but because of how math works, it does not have a defined value for that exact point. Sometimes people may say 1/0 = ∞, but the reality is that infinity is not a number but a concept.

In this case, the linear equation x = 0 represents the asymptote of the function y = 1/x, which means that y = 1/x will never intercept that line and, thus, will not have a y-intercept. In general, any time that a function has an asymptote that lies on one of the axes, it will be missing at least one of the intercepting points.

In fact, the example we have shown you (y = 1/x) also has an asymptote for y = 0, i.e., the x-axis. For the same reason as before, y = 0 is never achievable by the formula because it would require x = ∞, and as we said before, it is impossible to achieve that since infinity is a concept and not a number.

Before we move to our next topic, it is important to note that we have made extreme over-simplifications when talking about infinity, but we feel it is a good and fast approach for those that are not used to the concept of working with infinity in math. We recommend that you learn more about the proper ways of infinity, starting with the undefined expressions in math.

Intercepts and linear equations in machine learning and science

One could easily think that the usefulness of linear equations is very limited due to their simplicity. However, the reality is a bit different. Linear equations are at the core of some of the most powerful methods to solve minimization and optimization problems.

Minimization problems are a type of problem in which one would like to find how to make one of the variables as small as possible. This variable could be, for example, the difference between a prediction made by a model and reality. These types of problems are one of the most common problems and are at the core of machine learning and scientific experiments.

One of the most common and powerful methods to find the minimum value of an equation or formula is the so-called Newton method, named after the genius that invented it. The way it works is by using derivatives, linear equations, and x-intercepts:

Once the x-intercept is calculated, that value of x is used to repeat the process above, a specific number of times, until we arrive at a value of y that is minimum (which means that the derivative will be 0). In real life, arriving at the exact minimal point is not possible to do in a finite amount of time, so typically, people will settle for a "close enough" value.

One very common example is when using the chi-square method to fit some data to a formula or trend. In this case, the value that we want to minimize is the sum of the squared distance from the trend line to the data points, where the distance is calculated along a perpendicular line from the point to the trend line.

Is slope intercept form the same as standard form?

No, standard form, and slope-intercept form are two different ways of describing a line:

How do I convert standard form to slope intercept form?

If you want to rewrite your standard form equation to the slope-intercept form, follow these steps:

How do I interpret the slope of a line?

The slope (aka gradient) describes the steepness of a line. Slope can be
positive, negative, or zero and:

What is the slope of a line inclined at angle 45°?

This absolute value equation calculator will help you to solve equations that involve the absolute value of a linear expression. It shows intermediate calculations and graphs the solutions!
Absolute Value Equation Calculator

The cofunction calculator is here to find the cofunction of the trigonometric function you choose for a given angle between 0 and 90 degrees.
Cofunction Calculator