Let's recall that the polar and rectangular coordinates are two different systems in math that serve the same purpose: they allow us to identify a point on a plane. They differ in how they look at a given point:

The polar system sees the world in terms of circles: to describe a point, imagine a circle centered at the plane's origin and such that it goes through our point. Draw the radius that touches the point: the length of this radius (the r coordinate) and the angle between this radius and the horizontal axis (the φ coordinate) are all we need to identify a point.

To go from the polar coordinates to the rectangular coordinates, i.e., form (r,φ) to (x,y), apply the following conversion formula: 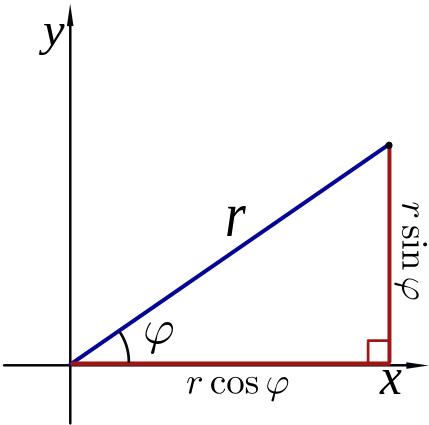 How to use this polar to rectangular coordinates calculator?

Satisfied with our polar to rectangular coordinates calculator? Want to learn more about various coordinate systems used in maths? Here's a few links you may want to explore:

This golden ratio calculator helps you find the lengths of the segments which form the beautiful, divine golden ratio.
Golden Ratio Calculator