This length converter is a tool that enables quick conversion between length units in both imperial and metric, but not only that. It's equipped with twenty different units of length measurement:

This length conversion calculator works by typing units (up to 11 in the same calculation) into the tool. The length converter then returns your results in each unit in real time. Click on the unit name if you want to perform length conversion to a different unit than the default ones chosen by the Omni team.

Once you've mastered lengths and their conversion, you can apply that knowledge to circles in our circle length calculator. If you are looking to convert between units of area, another tool we would recommend is the square footage calculator.

To find out what the conversion factors are between nine popular length units, check out this length conversion table:

We've decided to round some of the conversion factors to fit into this table. Thus, some of these values are not exact, but they still have reasonable accuracy.

If you are wondering how to quickly convert between different units from the same system, check out these two simple length conversion charts:

Moreover, we've decided to make a list of the most popular length conversions. The ones that you're often asking for are:

If you're wondering how many feet there are in a meter, here you are:

Find out how many centimeters are in an inch:

To convert between inches and feet use:

How many feet in a yard? Three!

Have you ever wondered how many feet there are in a mile? 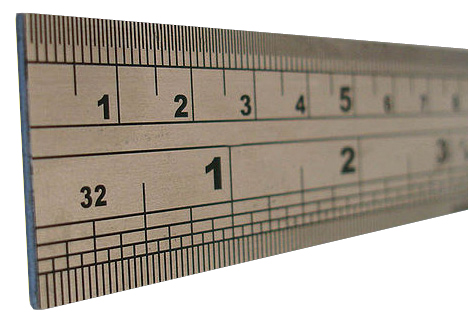 The inch (abbreviate as in or ") is a unit of length in Imperial / the US metric system. The measure comes from - by some definitions - the width of a human thumb. In some languages, e.g. Norwegian, Afrikaans, Italian or French, an inch is derived from the word for thumb or, in some cases, it's the same word. In the 14th century, the inch was defined by the king of England as three grains of barley, dry and round, placed end to end, lengthwise.
Inch definition varied through the ages but during the 1950's an international standard was accepted, and since then the inch is equal to exactly 2.54 centimeters.

On a daily basis, inches are used in US, UK, Canada and other countries which were formerly part of the British Empire. Height, length, width may be measured in inches, also many sizes are expressed in units derived from inches (e.g. shoe size).

What can be measured in inches - not only in the US, but worldwide?

One international inch is then equal to:

The foot (abbreviate as ft or ') is a unit of length in an Imperial / US metric system. It's a measurement based on the human body as well, as the name indicates. The unit was standardized in the 1950s, and since then it's equal to 0.3048 meters exactly:

The use of feet has been around since ancient times by many different civilizations, but the actual length differed between them. The foot was used, e.g. in:

In England, the foot measure also changed through the ages - it started from Roman standards, then Belgic Celts foot of 13.2 inches or Welsh foot came and went. The feet definition varied from region to region, city to city, later even the kings changed the measure according to their desire - e.g., Henry I was said to have ordered a new standard based upon his arm. Then Edward II of England introduced some kind of standardization by introducing the statute foot which was 10⁄11 of the old foot. The final agreement on the foot length came much later, in 1959, when the international yard and pound agreement was accepted. Since then, yard in the United States and countries in the British Commonwealth is equal to exactly 0.9144 meters. As yard was defined, the foot could be calculated as well. Thus, it's equal to:

In the US, two types of feet are used on a daily basis: the international foot and the survey foot:

Feet - and the whole imperial system - are used widely in the US. And almost only there. The US is the only industrialized country in the world that hasn't officially adopted the International System of Units, also called the metric system. The other two countries using the imperial system are Liberia in Africa and Myanmar (also known as Burma) in Southeast Asia. Canadians and the British use a mix of both systems - metric and imperial (e.g. men's hight is usually expressed in feet combined with inches).

Feet are not widely used outside of the English-speaking world. The only obvious example is the measurement of altitude in international aviation.

Meter (British English: metre) is the base unit of length in some metric systems, including the International System of Units (SI).

The meter definition changed as scientific methods in measuring developed. Now it's defined as the length of the path traveled by light in a vacuum in 1/299,792,458 of a second.

But how was it characterized before?

The table below sums up the chronology of a meter definition (by Cardarelli, 2003).

Imperial and US measurement system are not the same thing, but for length measures they are the same (they are non-identical in volume measures, so e.g. the cup can contain different amount of fl oz from both systems). The only countries which didn't accept the metric units are US, Liberia and Myanmar.

Six most often used US / imperial length units were put into our length converter:

There are two other length units, but we excluded them from this length converter on purpose: a furlong's conversion ratio is not uniformly defined, and a league used to be a popular measure in Europe and Latin America but is no longer an official unit anywhere. However, you can find them below, with the most often used values:

Besides, 22 derived units with special names exist. We can split them into 5 categories:

How do I convert mph to ft?

To convert mph to ft:

How do I convert metric units of length?

How do I convert 36 yds to centimeters?

How do I convert inches length of fabric into centimeters?

To convert inches of fabric to centimeters of fabric:

Use the binary to octal converter to convert between binary and octal number systems.
Binary to Octal Converter

Our free fall calculator can find the velocity of a falling object and the height it drops from.
Free Fall Calculator