A black hole is a massive object with very special properties, one of which is the relationship between its temperature and its mass when considered as a black body.

We explore this relationship in the calculator, and we hope this simple tool will help you better understand the properties of black holes.

To understand this black hole temperature calculator, we first need to explain what is a black body.

A black body is a theoretical object in physics that absorbs all radiation that gets to it. The temperature of this black body depends on the amount of absorbed radiation, which in turn determines the frequency and intensity of the electromagnetic radiation it emits.

A black hole is an almost perfect black body and, as such, follows similar rules of emission and absorption.

As a black body, a black hole has an emission pattern in the shape of a Stefan-Boltzmann distribution, as shown in the image below, which also depends on temperature. 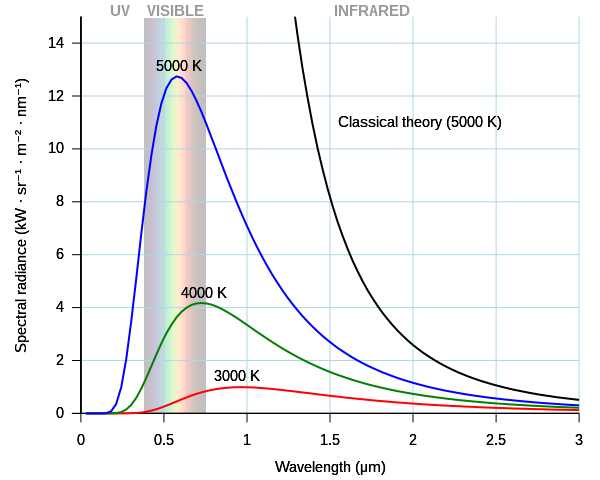 Since the temperature of a black hole (or its first approximation) depends on its mass, you can predict how a black hole will emit radiation, the so-called Hawking radiation, just by knowing its mass and using the Stefan-Boltzmann law calculator.

That calculator was built precisely for this purpose, allowing you to obtain a black hole's temperature (and thus emission spectra) by just knowing its mass.

💡 Converting temperatures between different units is a breeze with our temperature conversion.

The emission mechanism of a black hole is a very complex process that was first theorized by Stephen Hawking. It involves complex quantum mechanics, the uncertainty principle, and the spontaneous creation of particle pairs. Don't worry, we don't fully understand it either. We can, however, provide a very simple and quick explanation.

Imagine a pair of particles created on the edge of the event horizon so that one of the particles can escape the black hole whilst the other gets trapped inside the black hole's gravitational field. The one that escapes is Hawking radiation.

To learn more about this process and the event horizon, please have a look at the Wikipedia articles on Hawking Radiation and the Event Horizon, as well as at the Schwarzschild radius calculator, for its explanation on how the event horizon is defined and its importance.

One of the surprising facts about Hawking radiation is that it increases as the size of the black hole decreases.

This result constitutes one of the most mind-boggling pieces of Hawking's work – the conservation of energy, together with the emission/radiation process, leads to only one possible conclusion (again, in a very simple and very incomplete statement): "All black holes evaporate, and they evaporate faster as they get smaller".

The relationship between the mass and temperature of a black hole is very simple and is set out in the above equation, where all values, except for the mass (M) and the temperature (T), are universal constants.

Let's see what each of the parameters refers to, as well as the values of the constants and typical values for the free parameters:

Using the black hole temperature calculator is as simple as inputting either the mass or the temperature of the black hole, which will give you the other parameter. It is important to note that typical black holes have a mass of at least several solar masses. Still, it is also interesting to see what would happen in the case of much smaller micro black holes, which have been theorized but never experimentally observed because of how fast they evaporate (amongst many other reasons).

As we can see from the example above, the black body temperature of a typical black hole is very low; that is, they emit a very small amount of Hawking radiation, which explains why black holes in the universe seem to exist forever.

It is also important to realize that this temperature-mass relationship only holds when there is no radiation absorbed by the black hole, i.e., in a dark and cold environment very similar to the darkest parts of the universe. In reality, many of the black holes found in the universe do absorb and interact with other massive objects. Hence, their real temperature is different from the expected black body temperature.

With this gravitational time dilation calculator you can check how much time slows down by near big objects.
Gravitational Time Dilation Calculator

This manometer calculator will determine pressures at specific points in any common manometer. Manometers are simple to use and knowing how to use them is a fantastic way to learn more about fluid statics.
Manometer Calculator

Use the dating theory calculator to enhance your chances of picking the best lifetime partner.
Dating Theory Calculator